The exclusive agreement will bring the box office hit to life through a range of exclusive rides, lands, and themed hotel rooms across Merlin’s global network of Theme Parks and Waterparks in Europe, UK, and North America

Merlin Entertainments has entered into a formal multi-territory exclusivity agreement with Sony Pictures Entertainment, to develop and operate attractions, rides, lands, retail outlets and themed hotel rooms based on the studio’s box office hit Jumanji film franchise across Merlin’s Resort Theme Parks and Waterparks in Europe (including the UK) and North America.

The first Jumanji experience to be launched as part of the agreement will be the world’s first Jumanji ride, which will open in April this year at Merlin’s Gardaland Resort in Italy, with a second activation already in development at a different theme park for a 2023 launch. 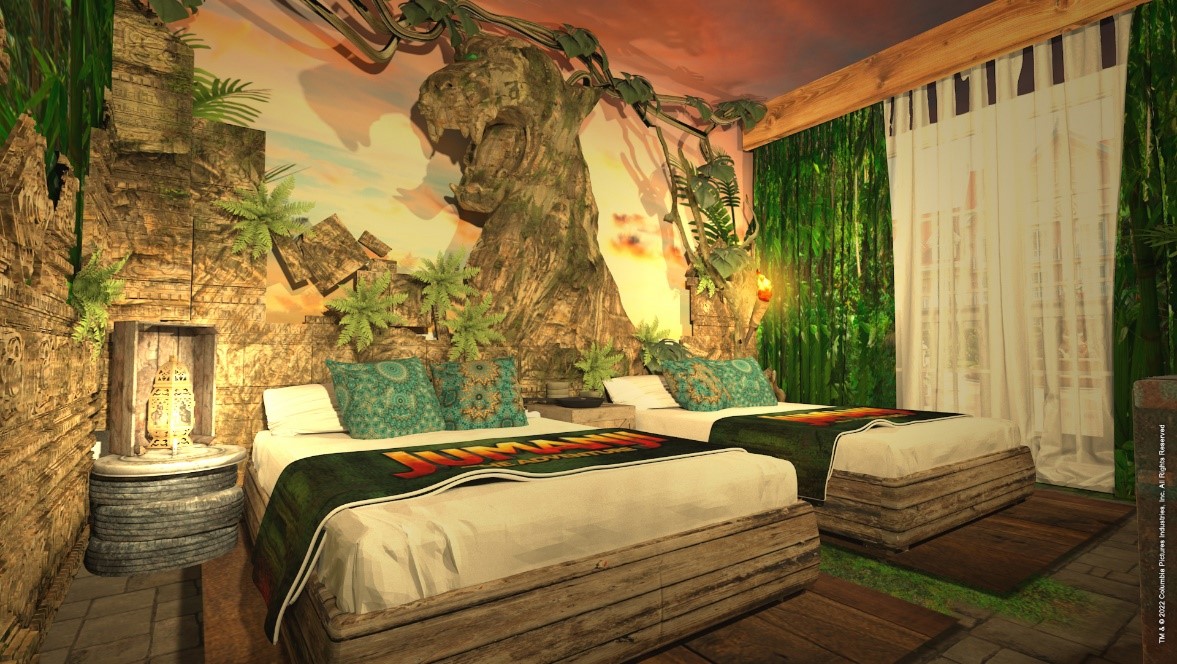 The deal supports Merlin’s broader global strategy to engage and work with leading IP and brands across its global estate, with existing successful partnerships including LEGO, Marvel, Peppa Pig, and CBeebies. The agreement is also a pivotal step in Sony Pictures’ larger global strategy to grow and expand location-based entertainment by utilizing its strong global film and TV brands to create opportunities for audiences around the world to immerse themselves deeper into the studio’s stories.

The collaboration further builds on Merlin’s successful relationship with Sony Pictures Entertainment, which has already seen the previous roll out of two “in-attraction” themed experiences including the Ghostbusters 5D ride at Heide Park in Germany and the Ghostbusters experience at Madame Tussauds New York.

“We are excited to be taking our relationship with Sony Pictures Entertainment to the next level with this strategic partnership. Sony are one of the top movie companies on the planet and Jumanji is a multi-billion-dollar brand which has appealed to guests of all ages, for over two decades. Our Merlin team are already hard at work developing brilliant creative concepts, which will bring to life the blockbuster-famous Jumanji film across our Theme Parks and Waterparks. We can’t wait to deliver thrilling rides and experiences for guests and film fans alike! The game is certainly on!”

“Merlin is the ideal company to bring the world of Jumanji to life. Their commitment to strong storytelling, quality of craftsmanship and fantastic guest experiences ensure that fans of Jumanji will be fully immersed into the worlds of our films and have an unforgettable experience. I am very pleased to expand our relationship with the great team at Merlin.”

Following on from the original Robin Williams film in 1995, the adventure continues in the brand-new film Jumanji: Welcome to the Jungle (2017) and Jumanji: The Next Level (2019), starring Dwayne Johnson, Jack Black, Kevin Hart and Karen Gillan. The film franchise’s continued success has made it Sony’s biggest wholly owned film franchise of all time. Taking over $2.1bn at the global box office the Jumanji film franchises are popular with both family and teenage audiences globally.

About the Jumanji Film Franchise

Sony Pictures’ Jumanji film franchise, based on the award-wining children’s book of the same name by Chris Van Allsburg, has taken in over $2.02 billion at the worldwide box office. Moviegoers were first introduced to the world in 1995 when a mysterious game transports its players to the jungles of Jumanji! The film starred the late Robin Williams, Bonnie Hunt, Kirsten Dunst and Bradley Pierce. Over 20 years later, the adventures continues in the brand-new film Jumanji: Welcome to the Jungle (2017), where the game changed as four teenagers in detention are sucked into the world of Jumanji. When they discover an old video game console with a game they’ve never heard of, they decide to play and are immediately thrust into the game’s jungle setting, in the bodies of the avatar characters they chose (Dwayne Johnson, Jack Black, Kevin Hart, and Karen Gillan). What they discover is that you don’t just play Jumanji – Jumanji plays you. To win, they’ll have to go on the most dangerous adventure of their lives, or they’ll be stuck in the game forever. Following the success of the 2017 film, the gang (Dwayne Johnson, Jack Black, Kevin Hart, and Karen Gillan) is back in Jumanji: The Next Level (2019), but the game has changed. As they return to Jumanji to rescue one of their own, they discover that nothing is as they expect. The players will have to brave parts unknown and unexplored, from the arid deserts to the snowy mountains, in order to escape the world’s most dangerous game.

Merlin Entertainments is a global leader in location-based, family entertainment. As Europe's Number 1 and the world's second-largest visitor attraction operator, Merlin operates 139 attractions, 23 hotels and 6 holiday villages in 24 countries and across 4 continents. Merlin’s purpose is to deliver memorable experiences to its millions of guests around the world, through its iconic brands and multiple attraction formats, and the commitment and passion of its employees.